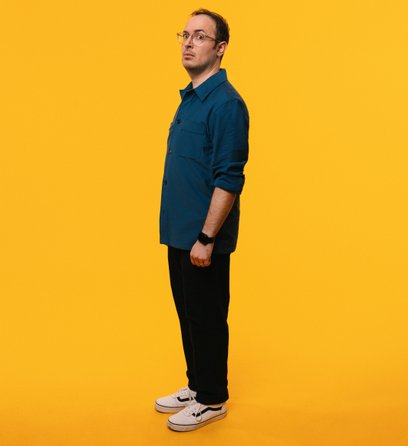 Sam Fletcher is an actor, writer and comedian. His charming, quirky brand of comedy landed him a nomination for the FOSTERS EDINBURGH COMEDY AWARDS, and he continues to perform regularly on the comedy circuit.

Put simply no other show has made me smile so much this year"
**** Alice Jones, The Independent

As an actor he has appeared in TED LASSO (AppleTV), DREAMLAND (SKY), SHAMELESS (C4),

As a comedy writer, Sam supplies jokes and material for a variety of light entertainment programmes including Comic Relief, THE GENERATION GAME (BBC) Amazon Prime's BACKSTAGE WITH KATHERINE RYAN and the BAFTA Television Awards, as well as writing sketches and dialogue for DNN (CBBC), Radio 4 and EMMY award winning animation THE AMAZING WORLD OF GUMBALL.

Most recently Sam has been working as Associate Producer and writer for Broadcast Digital Award winning show MEL GIEDROYC: UNFORGIVABLE on Dave.

Alongside his love to draw and make art, he's also an accomplished magician and Member of The Magic Circle.

He is represented by Patrick Bustin at PBJ Management 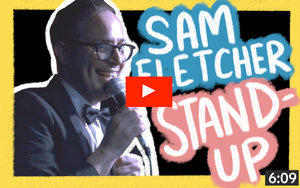